An investment framework and philosophy

OK, now that there's a bunch of words and arrows... what do they mean?

Simply, it's one complete way to look at the whole area of investing and help to remove some of the inevitable confusion from the area. It's just a framework. The investment words are all linked to definitions, so start there if you're at all uncertain of their meanings.

In investing, one buys & sells at certain prices and doesn't want to fight the trends - that's the lowest element or line of the framework above. The main trend and senior datum that controls which way prices go is the general rate of inflation, and that also controls what types of things in which to invest and that is the next line up in the above chart. Note that manipulation and "behind the scenes" actions or activities apply to all areas.

Fundamental analysis is used to determine both the expected rate of inflation or deflation, and whether the particular investment has good factual and positive data behind it. The combination of market sentiment and technical analysis (as an aside, market "manipulations" also belong in here) helps determine when to buy and sell. The analogy to spirit, mind and body on the top line helps to put it all in perspective.

Please note that the data here is extremely abbreviated and condensed. Many books have been written on each of the topics. It's only intended as a short but hopefully complete starting point. If you're new to investing, we recommend taking this page in small doses since it can be overwhelming. Also note that politics is included in both fundamentals and sentiment.

The basic theory behind our approach and thoughts is that at the highest level in investing is money itself, and both the supply of and demand for it. The central banks and regular banks of the world (like the U.S. Federal Reserve System) are the ones that create the money and are 'in charge' of it. They are also the primary cause of inflation or deflation. So we follow what they're doing, since the amount of current and expected inflation is, in our opinion, the most important factor in successful investing.

Step one on investing is to have some reserves for emergency purposes, like living expenses after unexpectedly losing a job or unexpected medical expenses or just plain unexpected life situations. Opinions vary but somewhere between three and six months basic living expenses is prudent in our opinion, and anything is better than nothing. Investing is much simpler and less stressful if one knows there's a stable base underneath.

If you do not have funds for investment, start putting aside a percentage of your income every pay period into an account. Opinions vary here too, but whatever works for you up to 10-15% is our guideline. If you can't set aside anything, stop right here and get that handled before hoping that investing is the answer to your problems.

The first question to answer is which way is inflation going, since that controls which investments one should avoid and which ones are probably worthwhile. In general, for example, one should buy real estate during periods of significant inflation and one shouldn't get into debt during a depression.

We forecast what's coming up by using proprietary formulas. They're based on adding up all the money types that can be created by the banks, the Federal Reserve and other money creators. Then we subtract another set of figures representing all products and services, one figure of which is the US GDP. See our current general forecasts here, and our current inflation prediction here.

For shorter term investing and timing purposes, and after one is more comfortable with the area, other charts - such as those on our Key stats or Fed watch (warning, very advanced) pages as well as from other sites - may be helpful

The basic theory behind our approach and thoughts is that at the highest level in investing is money itself, and both the supply of and demand for it. The central banks of the world (like the U.S. Federal Reserve System) are the ones that create the money and control interest rates. That is way oversimplified but we have to start somewhere.

What types of investments during different 'flations, trends and trend changes?

Note that this is a conservative general guideline only, and dependent on the individual and the investment. Your opinions will likely be different.

After you've selected the type or types, what then?


So now you've decided on specifically what to buy and why you're buying it, the next step is when.

Or, how to use relationships and tools to help your trades have better entry and exit points. Yes, this is the technical analysis section and you'll need some definitions first:

There are lots of other tools here if you're interested, and they can be quite useful. This page is not intended to be a full course in technical analysis, but will get you started with what we think are the best TA tools. We use those tools to determine at which price to buy and sell. Here's some examples of how to use them:

Just look at how highs and lows in the various indicators align well with actual highs and lows. Notice how RSI and MACD work well for these Dow Jones Industrial Average weekly closing prices. See the same chart with current data, free. 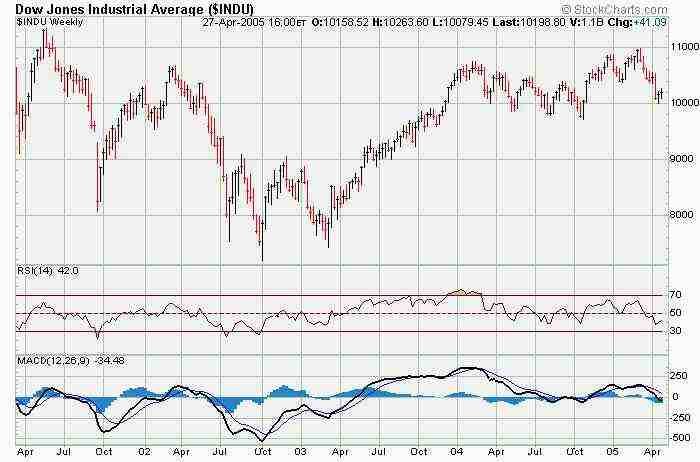 Just look at how highs and lows in the various indicators align well with actual highs and lows. Notice how Stochastics and Williams %R work well for these daily price charts. See the same chart with current data, free. 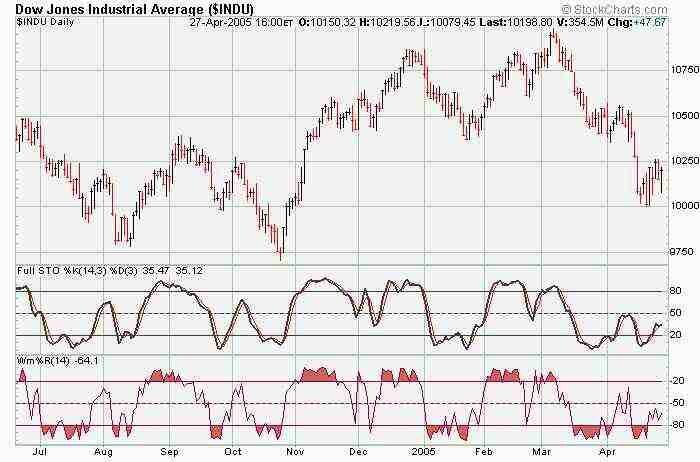 Just look again at how the highs and lows align well with actual highs and lows. The basic idea here is that when there are too many investors thinking the same thing, the market frequently goes the other direction. See a similar chart with current data, free.

Now we'll switch to the gold market. The two blue trend lines show long term support under the price. If they're broken by more than 3% or so, its likely the prices will continue much lower and perhaps down to $350-370. The green one shows a likely longer term target of over $500.
See the same chart with current data, free. You can draw your own trend lines on a current chart. Just click the "Add Annotations" button and you'll get a window similar to the one below. Draw away with the available tools and play with them. Hovering the mouse cursor over the tool will tell you what it is. 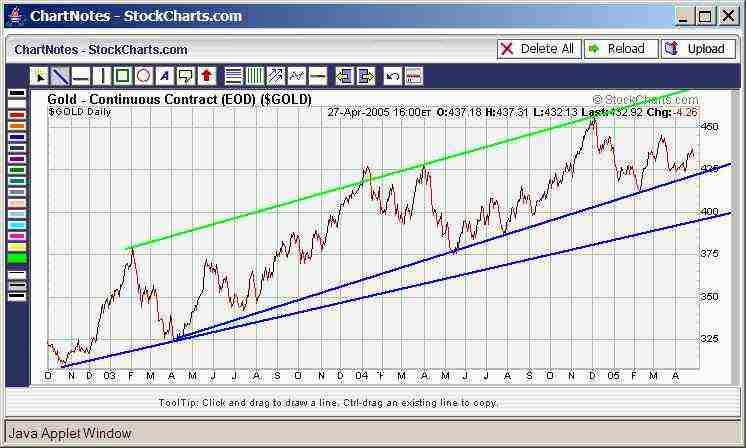 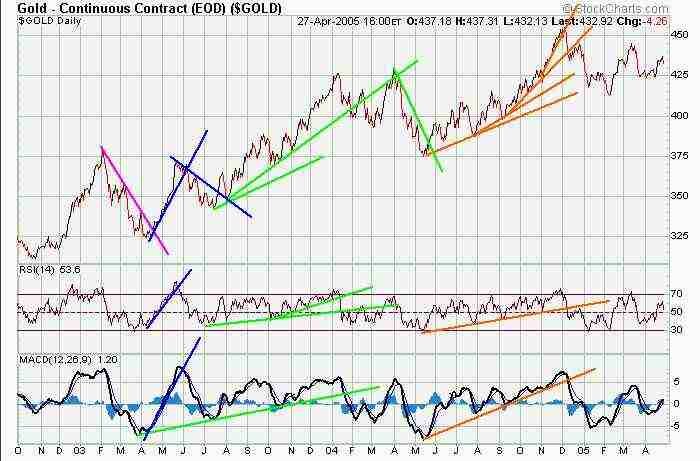 One last switch, this time to the technology index, the NASDAQ. Note that trend lines also work on a very long term chart, and indeed this chart shows a classic pattern of three trends of increasingly steep trends lines. Trend lines work with log based charts too.

And now for something completely different, with apologies to Monty Python.
So, if you just happen to be wondering if there are any "natural" points where prices tend to cluster during up or down trends, check the chart below which has been enhanced with the Fibonacci tool. We've found it to be another handy tool for helping to determine where prices tend to reverse trend.

(stub - more to come)
Accumulation/distribution and on balance volume (OBV), as well as just raw volume data, are very useful in confirming and projecting price moves.

Other viewpoints from folk we respect

A successful trading system
Lessons for the Apprenticed Investor

This guide may be quite useful for timing/switching across mutual funds or asset classes.